On Top Of Derby Leaderboard

By Dick Downey
The Downey Profile

Tiz the Law, in his second start of 2020, stamped himself once again as a leading 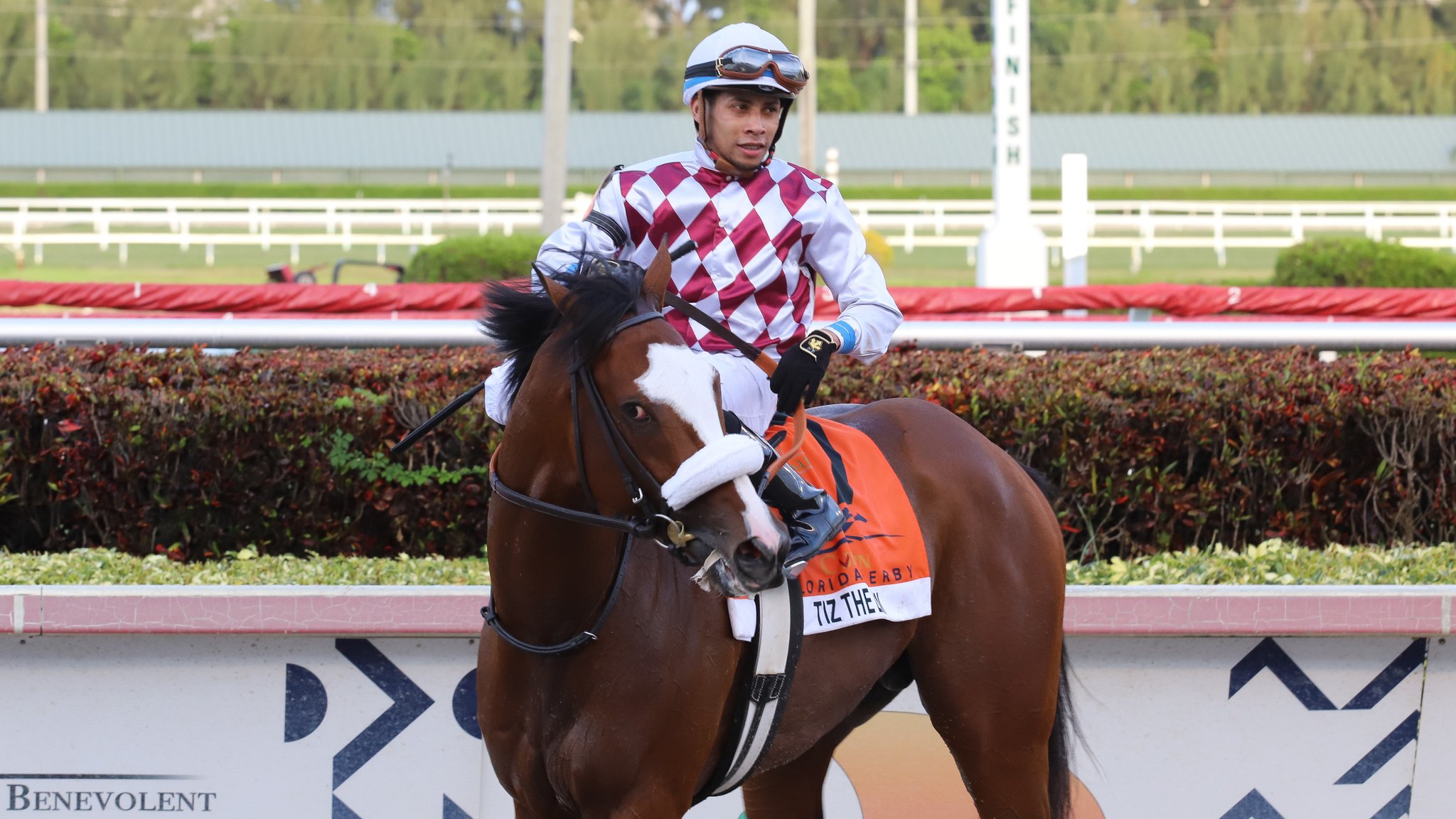 Kentucky Derby contender following a going-away win of the Florida Derby. He won the Holy Bull Stakes back on Feb. 1 to kick off his sophomore campaign.

Heading into the far turn, it looked like Ete Indien was getting the measure of Shivaree, but that one fought back even as Tiz the Law began to launch a serious bid.  Leaving the far turn, Tiz the Law established himself as the leader while Shivaree pushed back on Ete Indien.

From there, it was all Tiz the Law, who galloped to a 4 1/4-length win while geared down the last 70 yards. Shivaree was second, three-fourths of a length better than Ete Indien. Gouverneur Morris, who was sixth or seventh at the first three calls, finished fourth, beaten 5 1/4 lengths. Tiz the Law was timed in 1:50.00.

In fifth, beaten 10 1/2 lengths, was Independence Hall, followed by Candy Tycoon, My First Grammy, As Seen on Tv and Rogue Element. Disc Jockey, Soros, Ajaaweed and Sassy But Smart were scratched, leaving a field of nine from 13 original entries.

Tiz the Law picked up 100 Kentucky Derby points to push his total to 122, tops on the leaderboard. Shivaree got his first 40 points.  Ete Indien garnered 20 to make it 74 total points for him, and the 10 points to Gouverneur Morris leaves him with a total of 14.

Tiz the Law (Constitution) is a New York-bred for Sackatoga Stable, who won the 2003 Kentucky Derby with Funny Cide, trained by Tagg.

Barclay Tagg: “I was very impressed, but I’ve been impressed with everything he’s done. He just surprises me, everything he does. He just kind of rises to the occasion and does it with aplomb.”

Manny Franco: “I want to give all the credit to the horse. He broke out of there perfectly, like a shot, and I was able to let the horse on the outside clear me and I ended up in a great position. I sat third and I just thought about waiting for the right moment, and I was happy by the five-sixteenths pole. All the time when I called on him a little bit, he was there for me.”

Lead winning owner Jack Knowlton: “All we know is that we’ve got a horse that’s very special, and it’s pretty exciting for us. Unfortunately none of us could be there today. We were all watching it on TV from coast to coast.He is something special. It would be a lot of fun going to Kentucky in five weeks, but that’s not happening, obviously. Now we get to run some more races. Maybe the Wood will come back in play. Maybe we can do a Travers-Derby double. Right now it’s a blank slate. Nobody knows what’s going to happen where or when with all that’s going on in the country.”

Ralph Nicks, trainer of Shivaree: “He’s one tough little fella, that’s all I can say. There’s not many times when he doesn’t show up. He’s got speed, so we weren’t going to take him away from that if he broke well, and he broke well. The winner was awesome.

Florent Geroux, rider of Ete Indien: “I kept him second (early), I was really happy with that. He was a little more aggressive than I wanted. I’m not sure it cost me the win, but maybe second.”

RSS feed: RSS is a web feed format used to publish frequently-updated content. Use this feed in an RSS reader or browser (Safari 2, Firefox 2, or Internet Explorer 7 and higher)

ICS file: Use this feature to download an ICS file to use to import the calendar's event(s) into another program, such as Outlook, iCal, or Google Calendar.

ICS Feed: This is a live feed in the iCalendar format. To use this feed, you will need a program capable of subscrbing to a life iCalendar feed. Some examples include Apple iCal, Microsoft Outlook 2007 or higher, or Windows Calendar in Vista.